Opening Ceremonies of the Future

He shares how his experience in large-scale opening ceremonies, as well as the method of Design Thinking, informs the launch of Esch2022.

Battle Royal Studios: How did the collaboration between BRS and Esch2022 come about?

Brendan: We approached them actually. Esch knew our work from the last ECOC we co-produced in

Aarhus, Denmark in 2017
. Our more recent work showcased several large-scale immersive projects and I think Esch2022 was intrigued by our mix of commercial and cultural projects and by our ability to produce large, effective experiences for the public.

Battle Royal Studios: What is your experience in creating opening ceremonies?

Brendan: When I was 20, I worked on my first major ceremony. This was the opening for the Sydney 2000 Olympics and I was engaged as a co-creator for one of the main segments of this production. An experience like that really changes your perspective on things. The scale of the process and complexity of all working parts coming together was a real eye-opener, highlighting what’s possible within the creative industry at a world-class level.

From that point I had the privilege of working with some masterminds of ceremonies from all around the world, each experience offering new perspectives on spectator engagement and storytelling on a large scale.

What was always remarkable for me was the dedication of sometimes thousands of volunteers, who just wanted to be part of the activation. For those diverse groups of people, this was a magical experience, a once in a lifetime opportunity which formed relationships, developed skills and memories that would stay with them forever. And I found this, in many ways, almost more valuable than the spectacular ceremony itself.

Battle Royal Studios: The Design Thinking methodology played a significant part in the development of the Esch2022 launch concept. How did and does it help BRS in its creative process for Esch2022?

Brendan: We started the creative workshop phase for Esch2022 at the beginning of lockdown in 2020. We immediately created an online collaborative workshop structure to complete this phase as scheduled.

We created a concept prototyping platform with a voting system and series of brainstorming formats to really dive into the concept we thought was important, starting from scratch. This proved exceptionally productive, as it allowed us to have a levelled playing field for all creatives at the table. Meaning, the ideas delivered by the various team members during the sessions were really heard. The good thing about Zoom calls is that only one person can speak at a time. It is quite amazing what digital tools can do for democratizing the workflow!

Over several creative sessions we figured out the ‘Why’ we want to do the ceremony and everything evolved to support that core idea. The ideas were of course debated and voted on, until we had a string of ideas we all felt really connected to in terms of relevance and originality.

Battle Royal Studios: And how did that affect your work with the client?

Brendan: We lead the client through this same experience of concept prototyping to best understand what they expected to achieve with such a major undertaking. They completed creative tasks just as our concept team had done previously. And then we could draw parallels between the various sessions, showing how certain ideas aligned or conflicted one other. Via this collaborative process we also developed Esch’s vision statement, so each person was a contributor and could take ownership and be proud of the words written on the page.

The concepting process we upheld was rigorous, but this produced an exceptional and relevant concept which Esch2022 and Battle Royal Studios could see eye to eye on. These might sound like obvious revelations, but in the founding of a strong conceptual idea, these milestones are increasingly important for the longevity of a ceremony concept.

Battle Royal Studios: How would you describe your resulting concept for Esch2022?

Brendan: The tag ‘By Esch2022, for the region’ is being used a lot because of the heavy amount of content being produced by the local communities, but to boast, this could be the largest immersive experience Europe has ever seen and Esch is the creator of this journey.

More concretely, we have oriented the launch around a music festival, scavenger hunt and an immersive theatre experience. Somewhere in the middle of those three formats is the Esch2022 launch. As well as a huge offering from locally driven investigations and creations.

Battle Royal Studios: What was the thinking behind that concept? What role did ritual play in it?

Brendan: An important question we asked ourselves and certainly the client during the kick-off was: why ceremonies? Why invest so much time, money, energy on something which normally lasts less than 12 hours?

We even did an interview round speaking to global peers with ceremony backgrounds to hear their perspectives. Our conclusion was that the modern ceremony provides the chance to share our common values, to come together and signal to the city or world that something significant has transpired.

And certainly ritual plays a major role here. As a society we enjoy the moment of coming together and sharing a moment in time, pausing for a second of ritual, something we’ve done over millennia.

Battle Royal Studios: In what way will it differ from other opening ceremonies?

Brendan: Most opening ceremonies aim to include many volunteers but ultimately the audience’s role is as spectator. That format is not scalable. What we’re doing is placing the audience at the centre of the experience, so they become the ceremony. This is very exciting as the audience has the chance to choose their own adventure and dictate their involvement.

As audiences become more and more interested in hands-on experiences, we are going to see the whole live entertainment industry adapting to accommodate this emerging desire.

Already in prominent entertainment districts like West End, Broadway and Vegas you’re seeing major permanent venues being built to accommodate immersive experiences. Venues without seating or stages for example. Check out the latest projects from

Meow Wolf
(Vegas) and
Secret Cinema
(for Disney), It’s an exciting time for this genre.

Battle Royal Studios: The launch will be a hybrid experience. What potential do you see in this?

Brendan: What we’ve seen over the last 12 months is a radical shift how digital tools can shape our education and entertainment experiences. This is only going to continue despite lockdowns. In preparation for a full engaging experience which transcends borders, we’re developing a digital portal which allows people at home to be just as involved in the experience.

This is huge as it can exponentially grow our audience, so what might have been 25,000 live guests, could now be 250,000 digital guests simultaneously. So there are loads of opportunities here for hybrid events to engage both large groups onsite as well as the individuals sat at home.

Battle Royal Studios: What other learnings from Esch2022 will you take into your future projects at BRS?

Brendan: As we begin to learn more about evolving digital tools, we’re implementing them in all our new projects. We have an intricate new event portal that can deliver live poll results to dictate the flow of an event agenda for example. A ‘choose your own adventure’ feature which is very exciting for

These tools are only limited by our creativity and can dramatically shape any event or entertainment experience to better fulfil the desires of the audience. The aim is to make an event as engaging as possible and Esch2022 will provide the chance for us to trial and perfect this on many levels. So in a sense, everything we’re developing at the moment is transformative for Battle Royal Studios, who we are and what our clients and projects deserve. Welcome to Hybrid Culture!

Opening Ceremonies of the Future 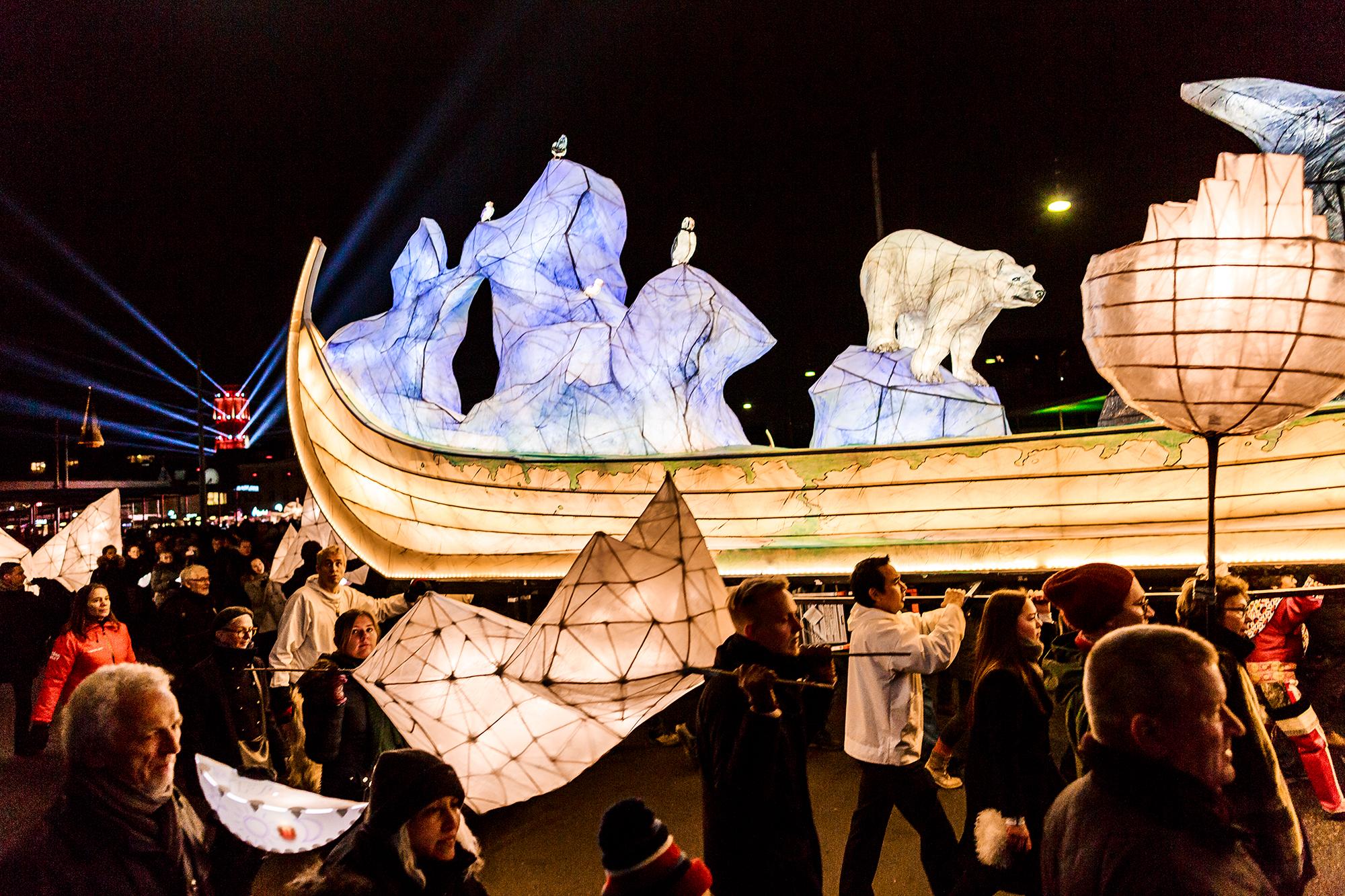 Battle Royal Studios supported renowned Director Nigel Jamieson to create an impressive opening to the European Capital of Culture in Denmark. Filled with striking light installations and dazzling live music, the procession and culminating show were a nod to the past, an embrace of the future, and a celebration of the present, engaging citizens of the region who stepped in to bring the ceremony to life.