We partnered up with Jack Morton Germany and Riot Games to show-direct the League of Legends European Championship (LEC) opening after their three-year-hiatus from live competition. The LEC is the professional League of Legends esports league run by Riot Games in Europe, in which ten teams compete. Hosted in Malmö Arena, the former Eurovision and hockey stadium was transformed into a canvas for both fierce esports competition and intricate lore telling.
Live Events
Music
Motion Design
Community
Storytelling
Show Direction
Concept
Show Design

To us, show direction and creative production go beyond the confines of the stage, as our craft purposefully manages brand stakeholders, company values, and audience expectations. While Riot’s ceremonies team provided valuable guidance on brand aesthetics and overall structure of the show, Battle Royal Studios in partnership with Jack Morton Germany conjured up a glossy opening show-style execution, ranging from concept and run of the show development to technical creative production, and show direction on-site. Together, we re-defined how Riot’s European League celebrates their season, finalists, and fans. 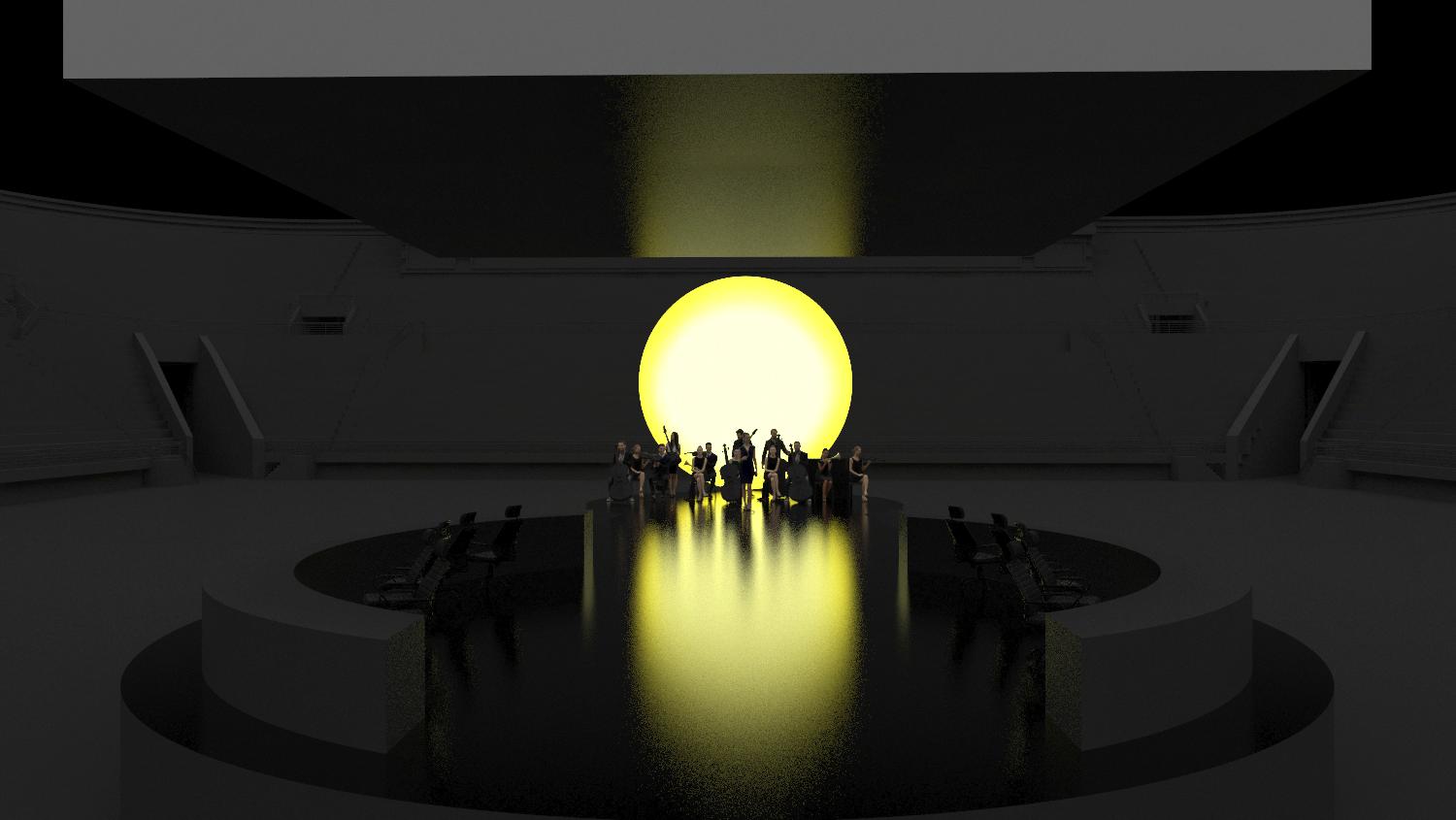 Building a Story: A show to celebrate influencers, players, and fans

Throughout this arena experience, the production teams were able to orchestrate the precious relationships between the teams’ distinctive characters, the mythologies of the game’s fictional universe, and its almost tribal fanbase. Playing to a sold-out arena venue and attended by LoL superstars, such as esports professional Martin “Rekkles” Larsson and Broxa, and casters Marc Lamont, Aaron Chamberlain, and Andy Day, the opening ceremony picked up on this season’s theme “Land of the Midnight Sun”.

Together with our show and stage directors, choreographers, show caller and ceremony stage manager, we designed an arena-sized kinetic stage, creative produced a show for a 16-piece orchestra, devised the entry for the 10 players, and staged the singer Cassyette (the voice of the LoL season’s anthem “

Awakened
”). The stage’s centerpiece was a kinetic sun that incorporated an LED screen 6m in diameter and was equipped with moving light fixtures, wash lights, and tiltable strip beams, to play to the “Land of the Midnight Sun” mythology; a mythical realm we entered during the opening ceremony by staging an eclipse, complete with its luminous aura, that cast its shadows over the entire arena.

From fan-centric concept to effortless execution

Conceptual mockups are an important first milestone in our creative process. We use them to give expression to our client’s briefing and already fuse them with our precursive research period. In this project, we specifically used them to study the Opening Ceremony space and its relation of the larger arena and the main stage in the venue’s center.

The results of this study of spatial arrangements, light settings, and possible action zones fed plenty of insights back to our creative team who found the most intriguing sweet spots and broadcast camera angles. In the next step, we were able to offer our client a range of options while visualizing the evolution of the idea from briefing to concept.

This gave us the opportunity to take our client into a rich collaborative process and discuss these possibilities as developed with vendors and technical providers – while keeping the show’s theme close at heart. 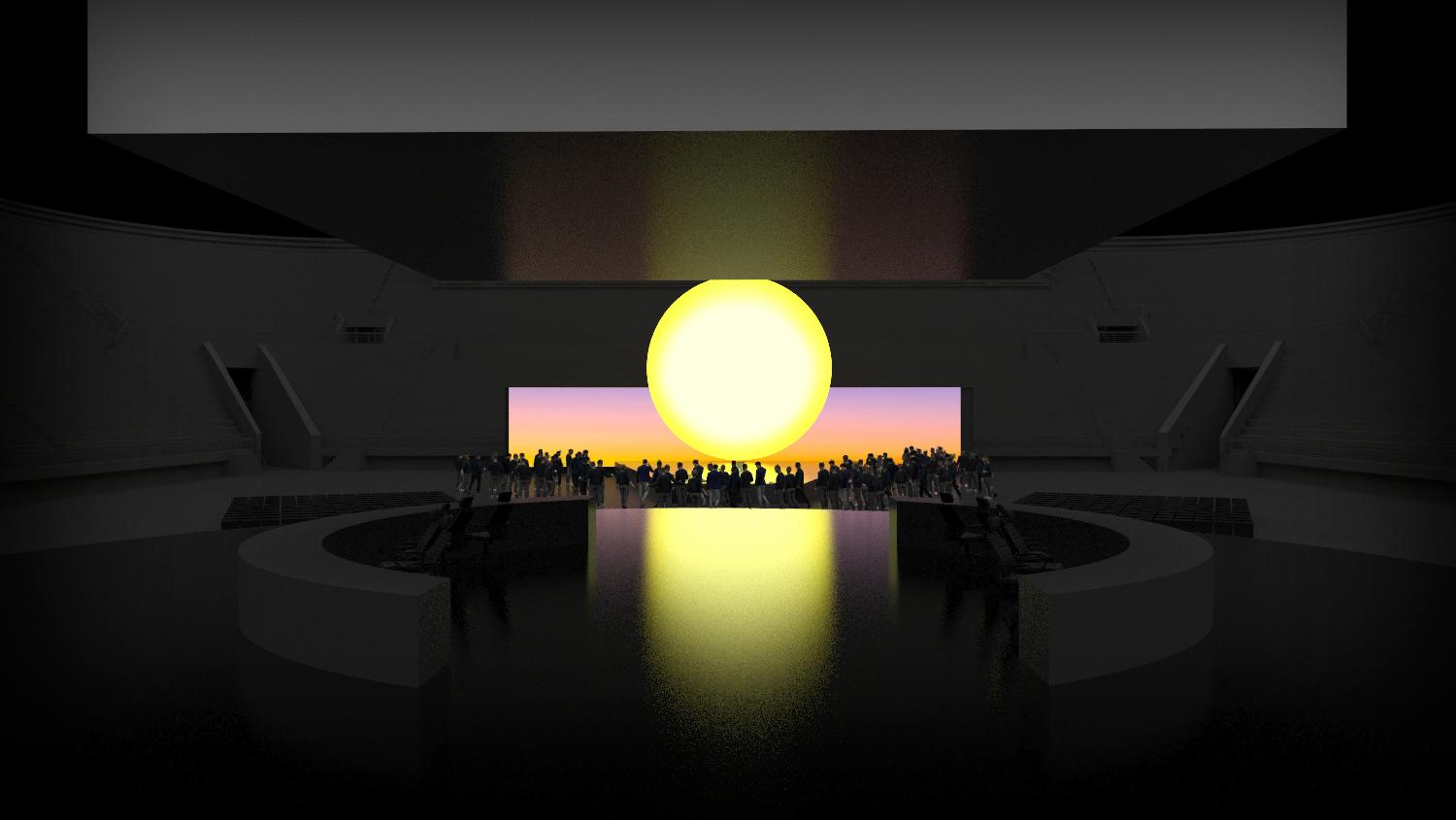 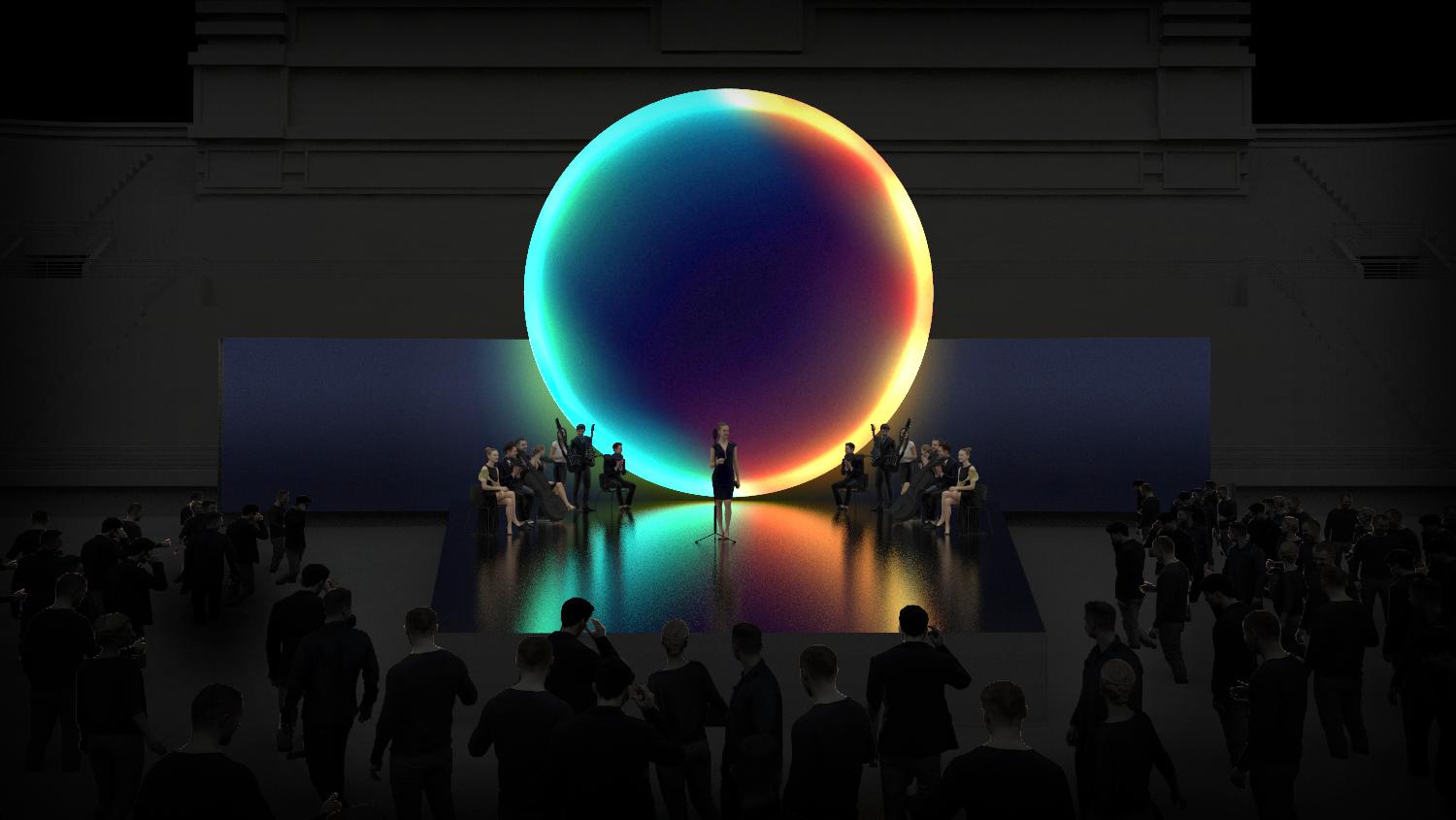 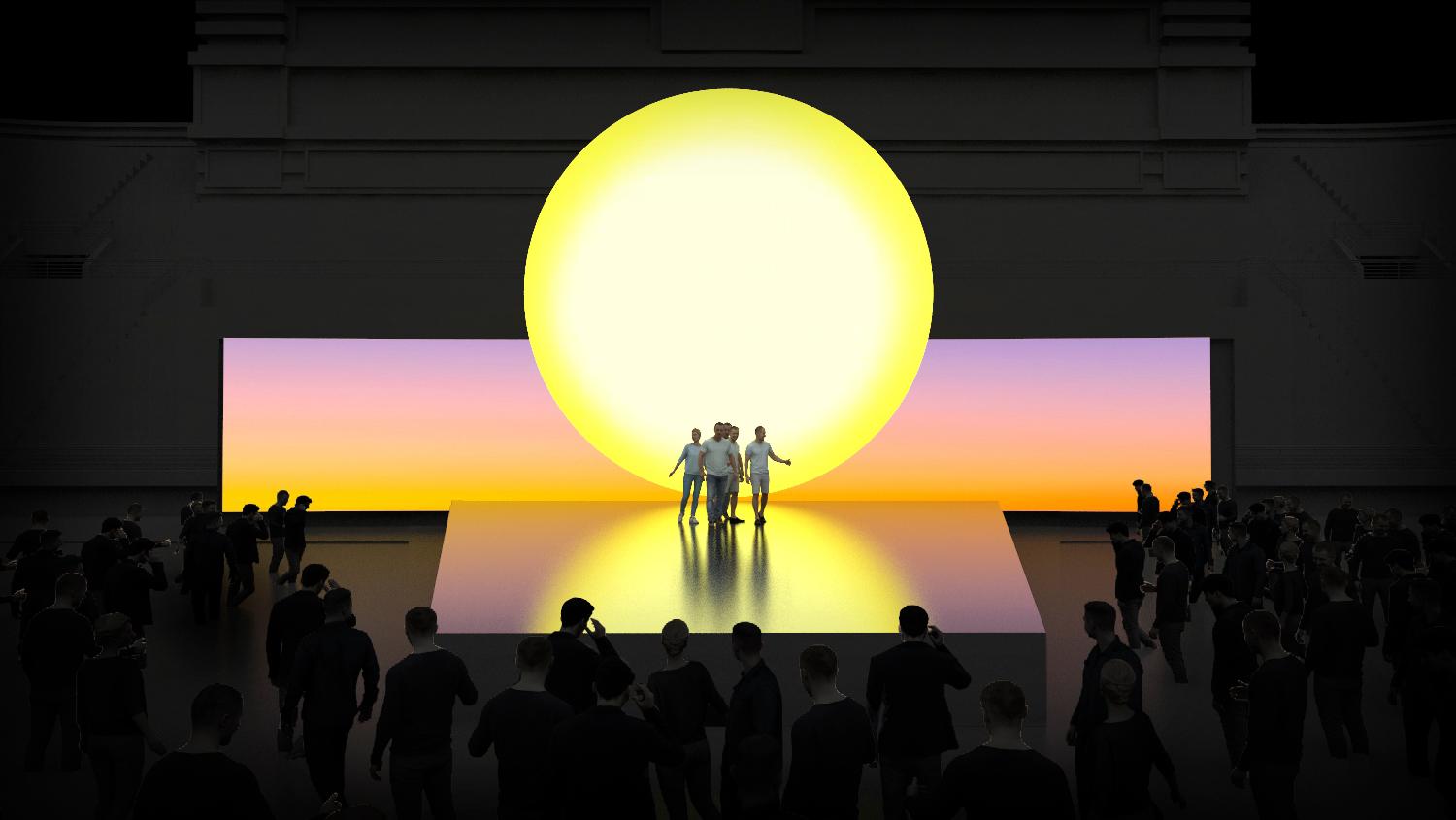 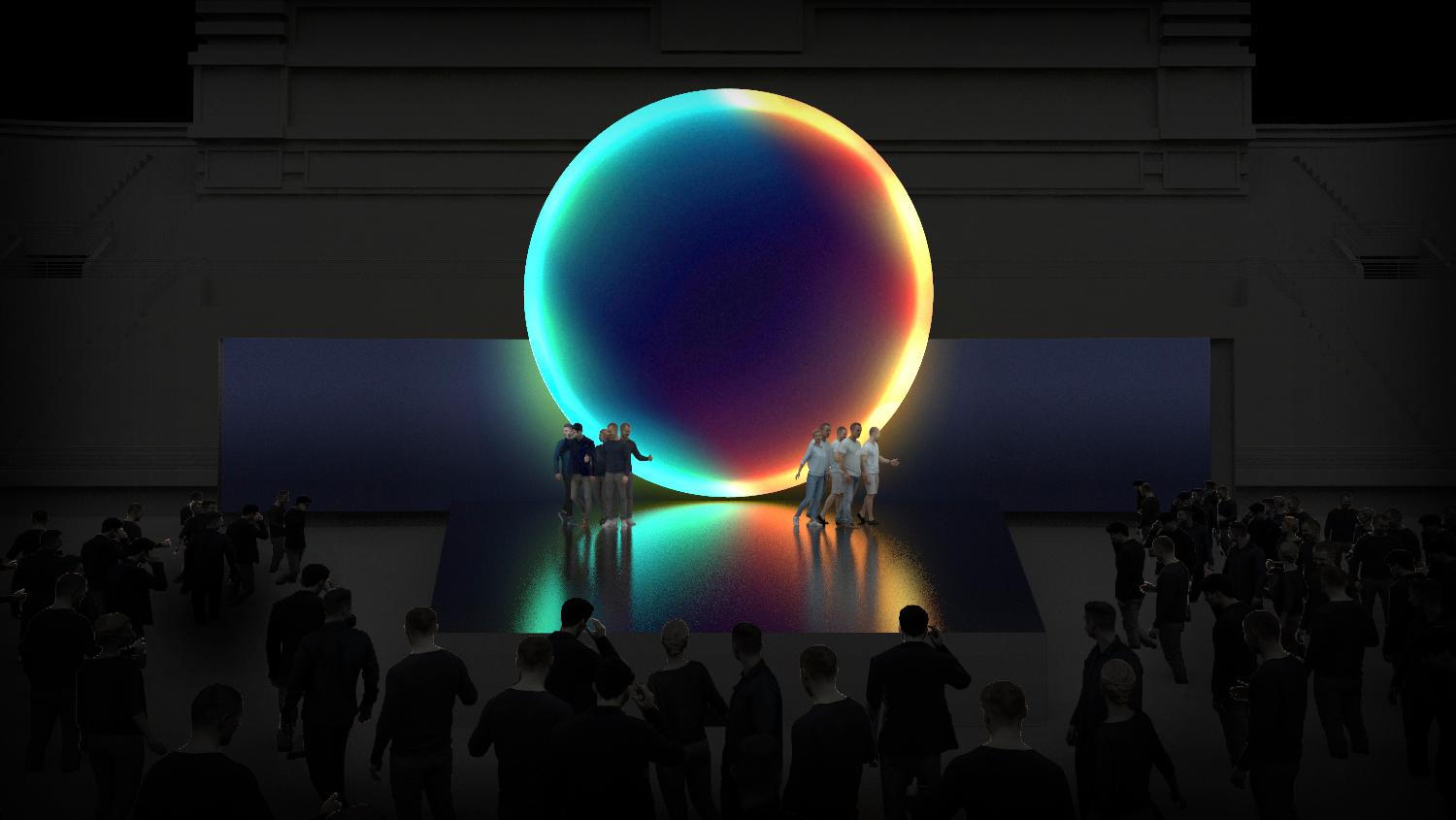 The central set piece of the opening ceremony stage was the sun, which gave expression to the briefing’s headline “Land of the Midnight Sun”. We designed a structural first mockup to implement all the technological features necessary for different presentation modes. We wanted the sun to display video content, but it was also meant to express the transition from sun rise to sun set to a fully-fledged solar eclipse and back.

This was the foundation we discussed with our vendors to find the most feasible option for this opening ceremony. Once we got feedback from the technical vendors, our in-house lighting designers, who are very experienced with creating large-scale custom-made lighting installations, drafted a series of technical sketches.

Again, this step came with an update on our mock-ups in order for us to get an understanding of the scenography’s inner workings.

Parallelly, we started thinking about the run of show – and how to purposefully employ all these technological means to create the magnificent, jaw-dropping, and very beautiful moments the briefing asked us to create. 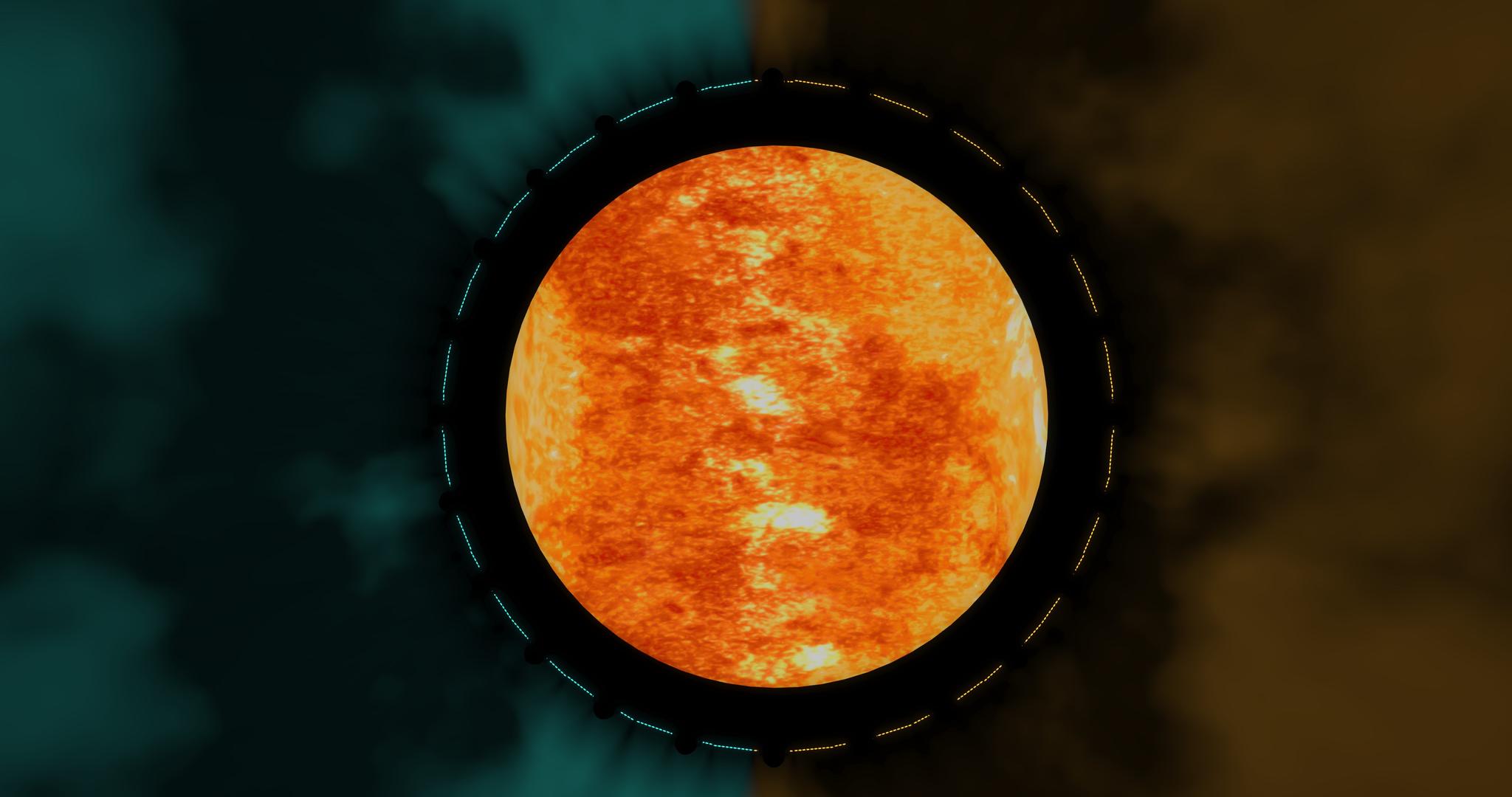 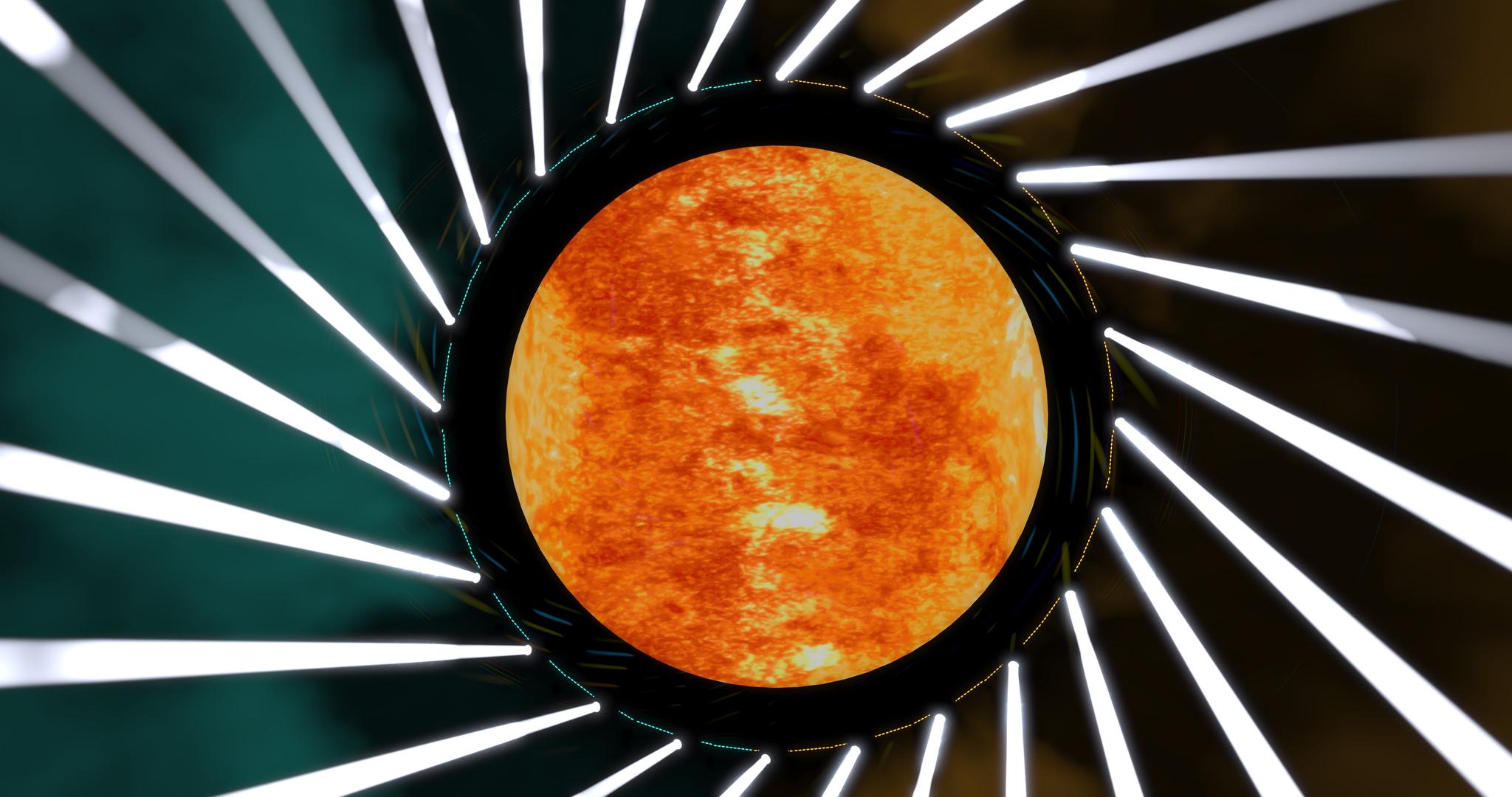 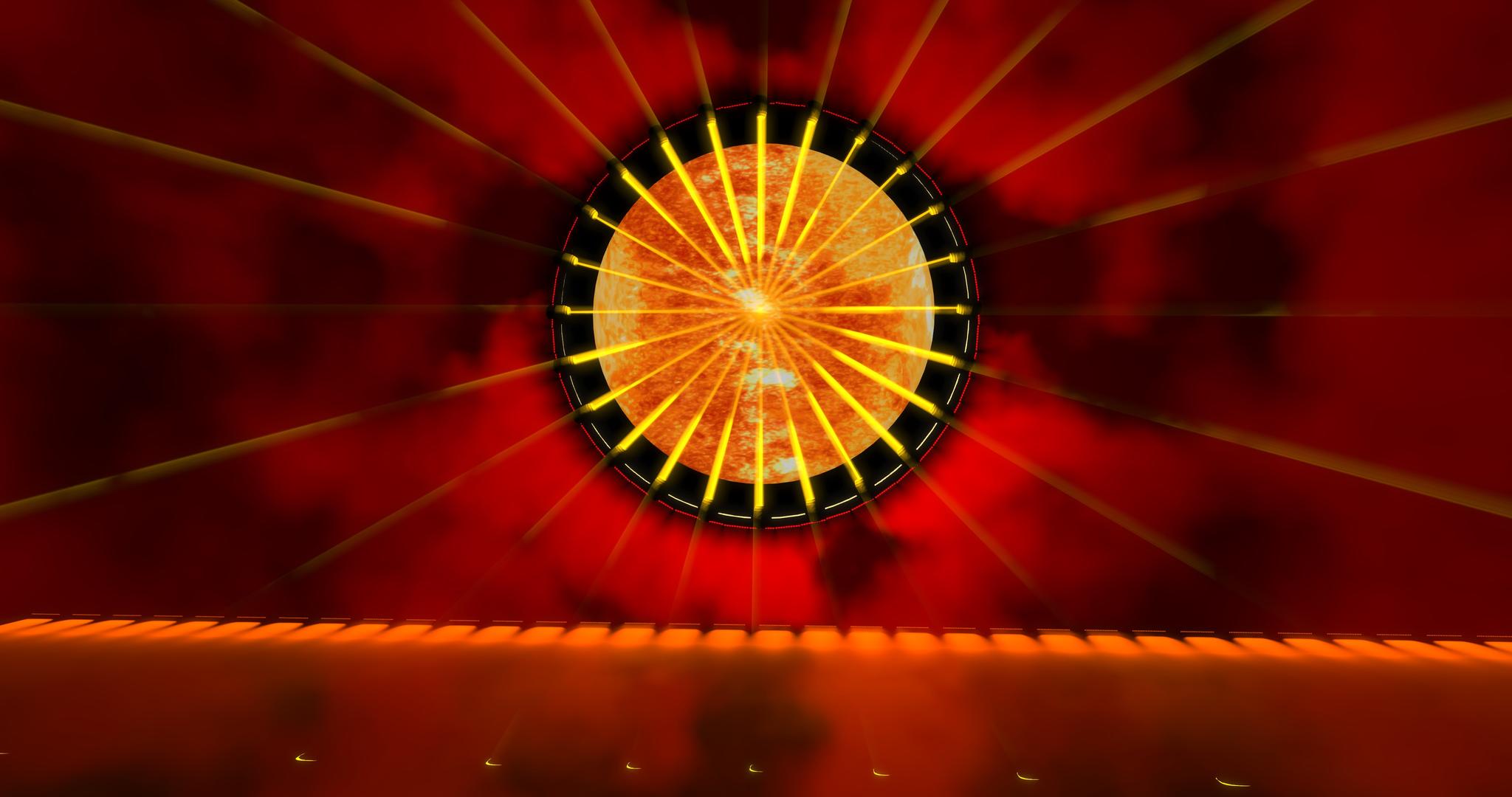 While vendors and our technical partners came up with the exact technological solutions, we embarked on outlining the actual show design from start to finish by creating the highlight moments and defining the calmer moments.

Together with the production’s lighting programmers, we visualized these key moments. 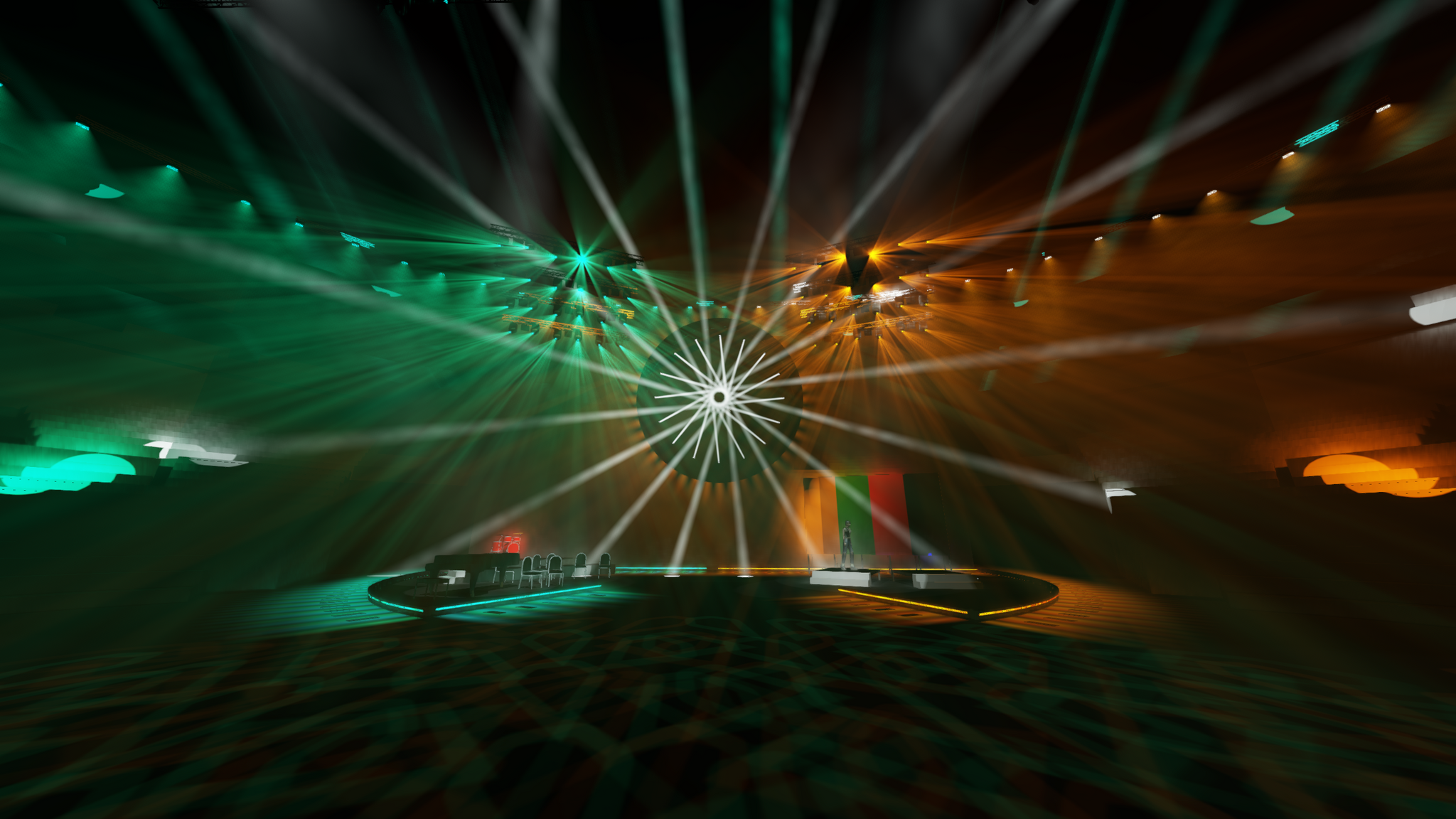 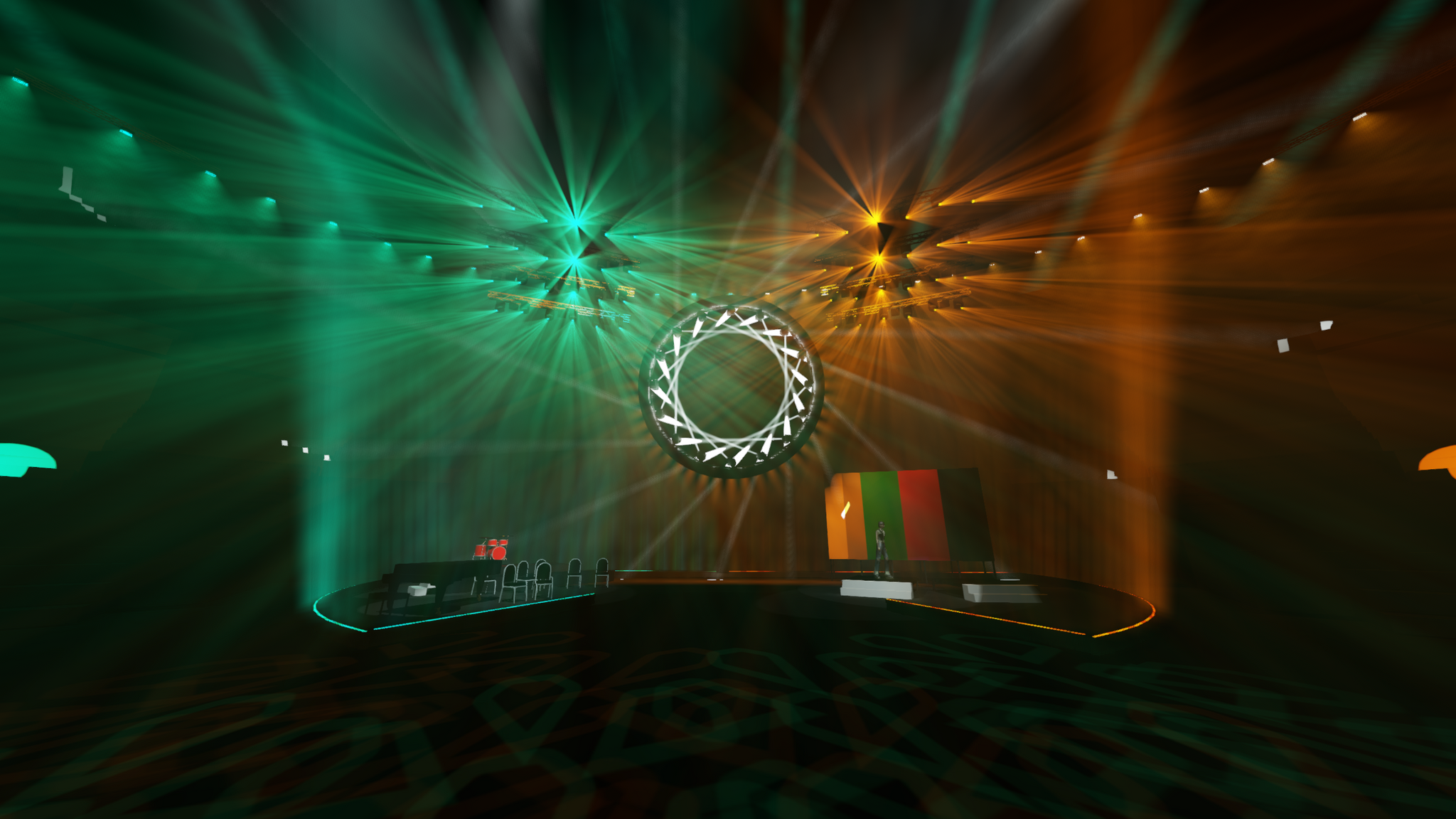 Prior to our on-site production period, we spent a few days in pre-focus – a condensed period of time in which our show directors work together with the lighting designers to establish a clear show structure and to create a blueprint for all other creative departments.

At the end of this process, we align with our client, production managers, and other show stakeholders, and take their valuable feedback to further improve the show during our on-site period. 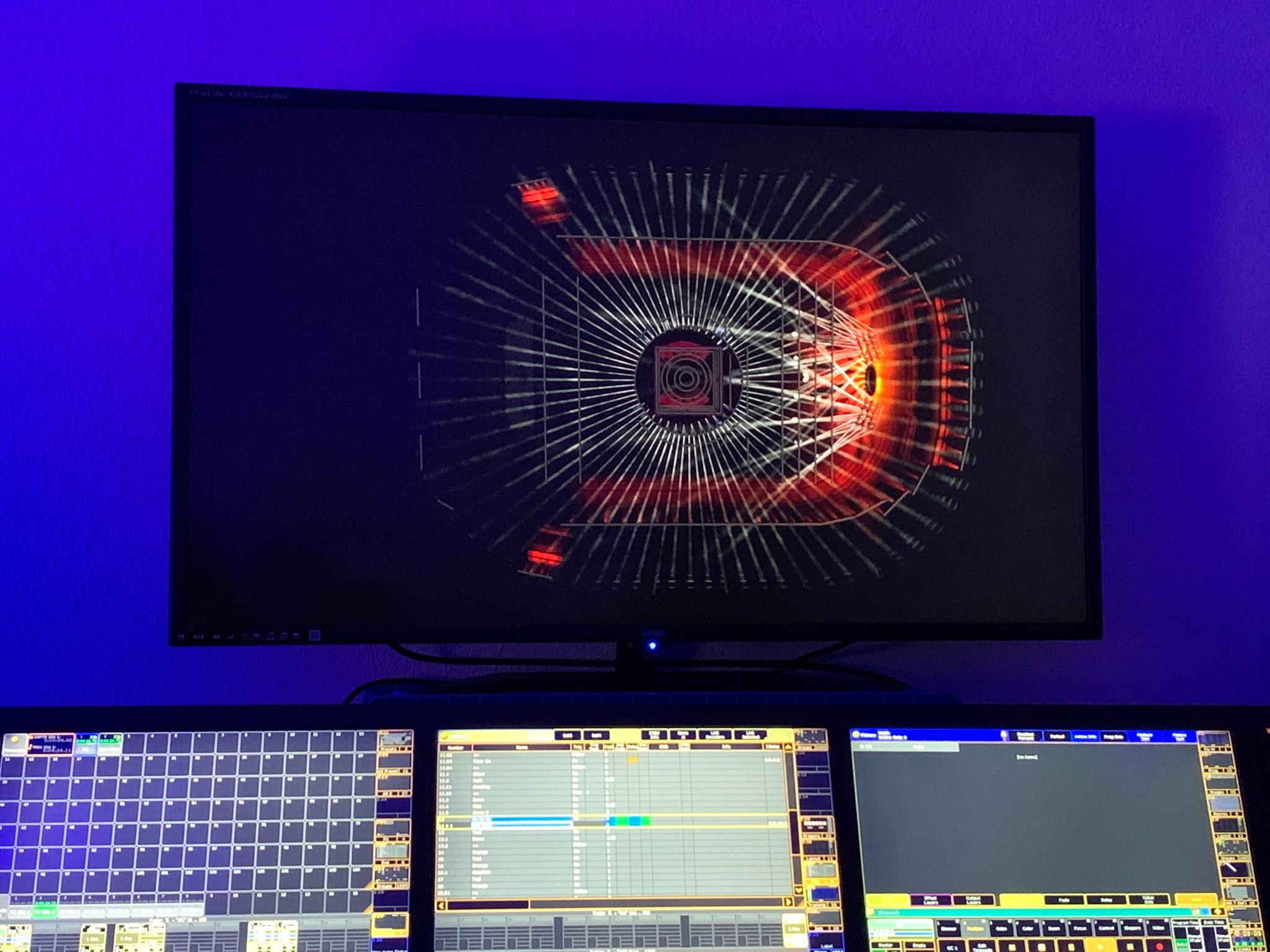 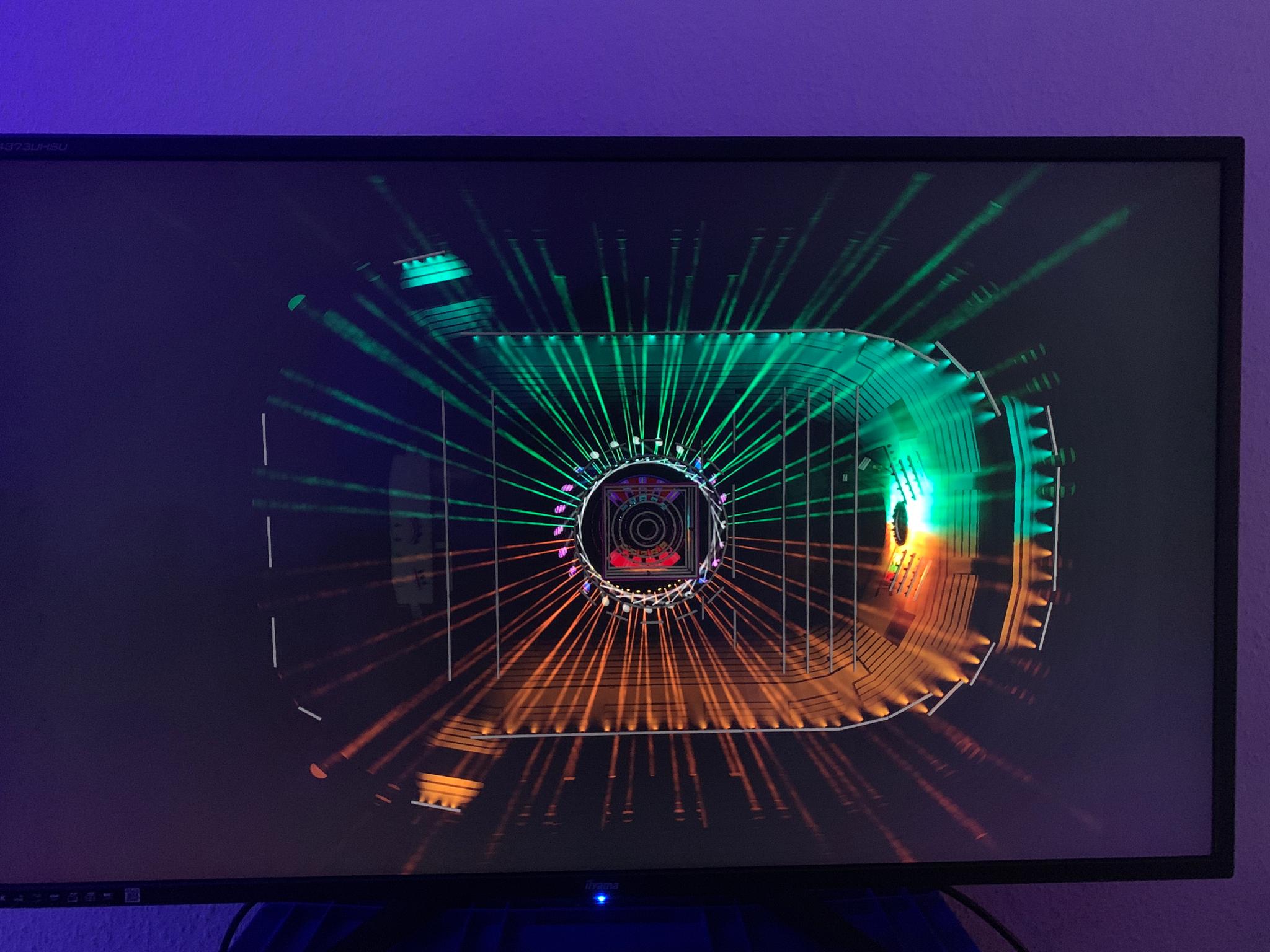 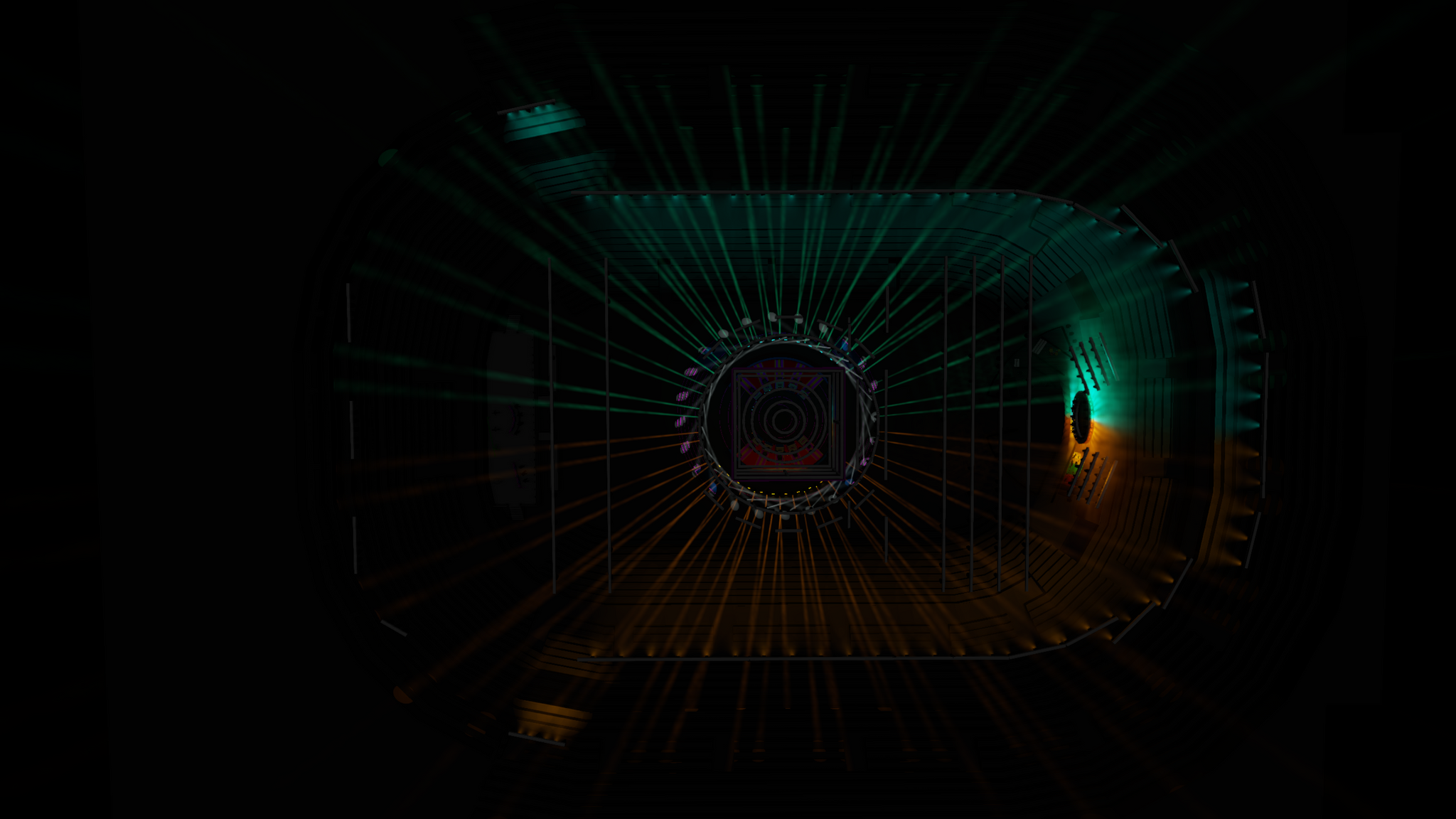 The Opening Ceremony stage was made up of the retractable Sun, a blender matrix in the background, two light matrixes up in the air, and several lighting and pyro fixtures to demarcate and give depth to the performance space.

This setup transformed the arena into the “Land of the Midnight Sun” by creating a visual pull at one end of the arena that sends several impulses across the space to all other action areas.

The retractable Sun, measuring more than 6m in diameter and weighing several tons, created a vivid background and allowed us to display video content, show a magnificent aura for the Sun’s eclipse mode, and create hypnotic beam shows.

It was our goal to create a different stage setting every time the camera came back to the singer Cassyette, so we purposefully employed all means available in diverse manners. 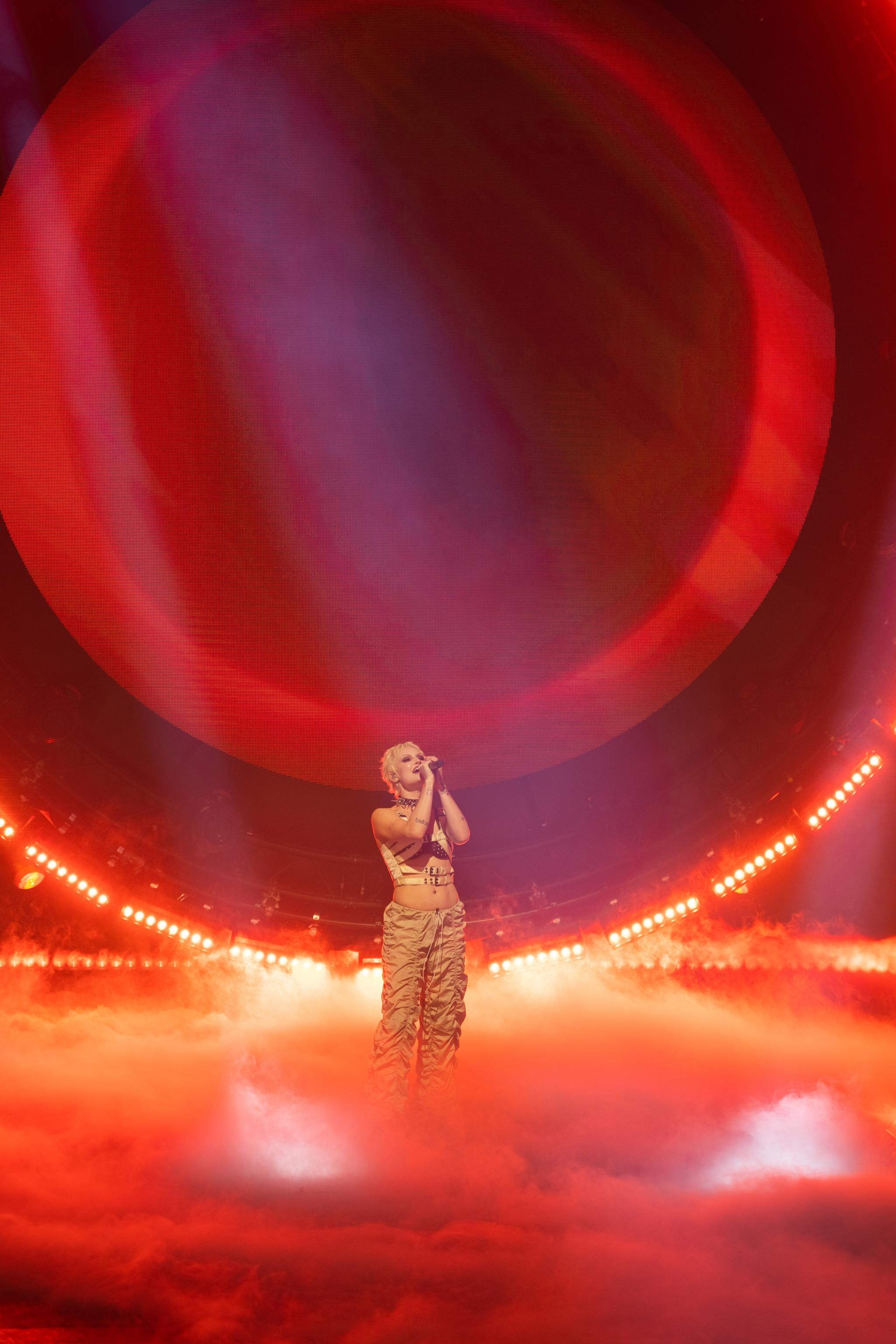 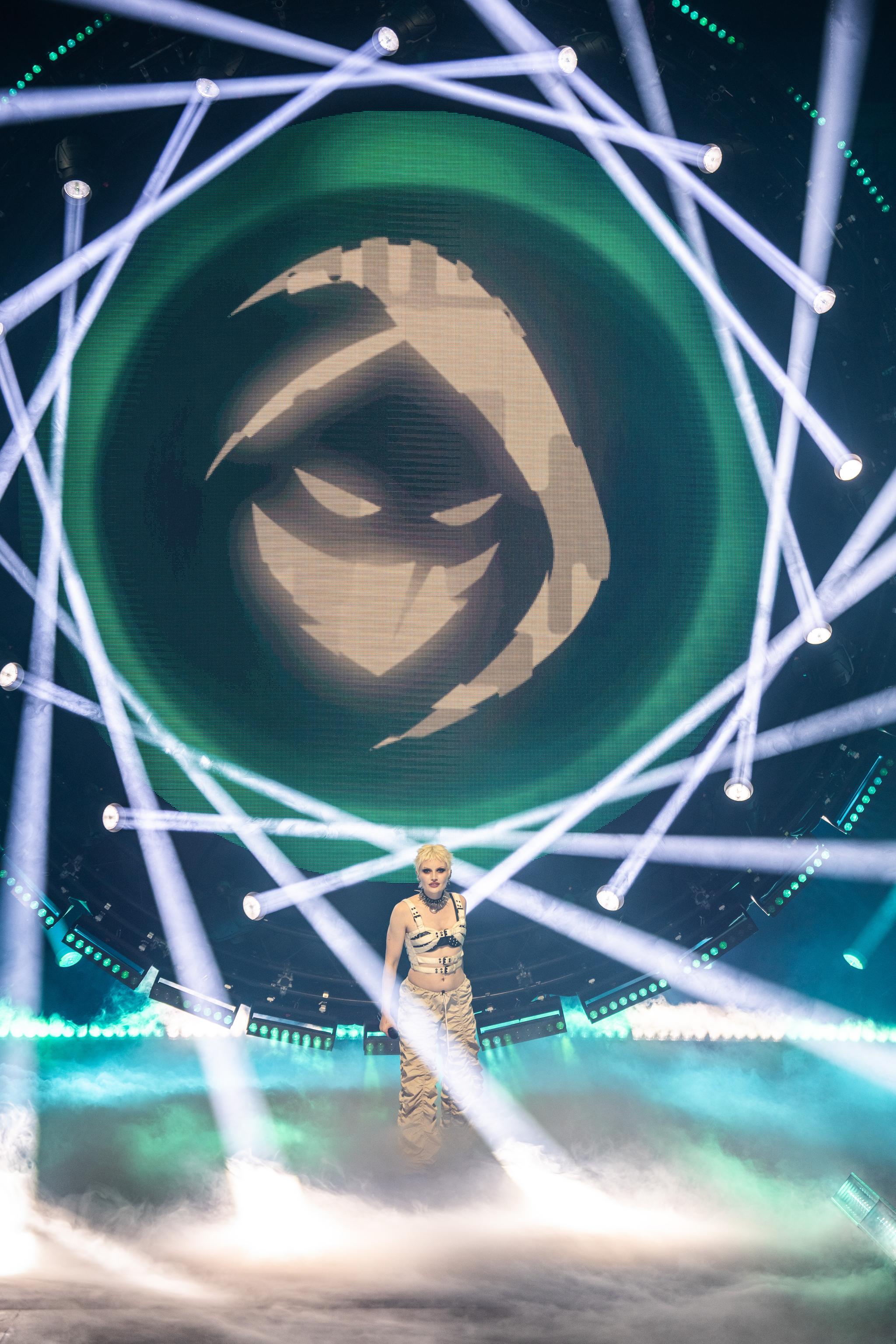 For each shot, we provided a different view by employing all the means available to us and by orchestrating the technical show departments and performers in a meaningful manner.

It was our obligation to manage, brief, and stage the 16-piece orchestra during the preparation and the on-site period. We implemented them into the run of show to make them a vital part to the show.

Our stage director and choreographer briefed and staged singer Cassyette who performed the LEC song “Awaken” in a spectacular new orchestral version. During the performance, we stayed in close contact with her via in-ear communication and made sure the short rehearsal period culminated in a strong performance.

Pyro, lights, and special effects were orchestrated by the show director in order to embellish bespoke moments and to create highlights for the camera and the on-site audience. 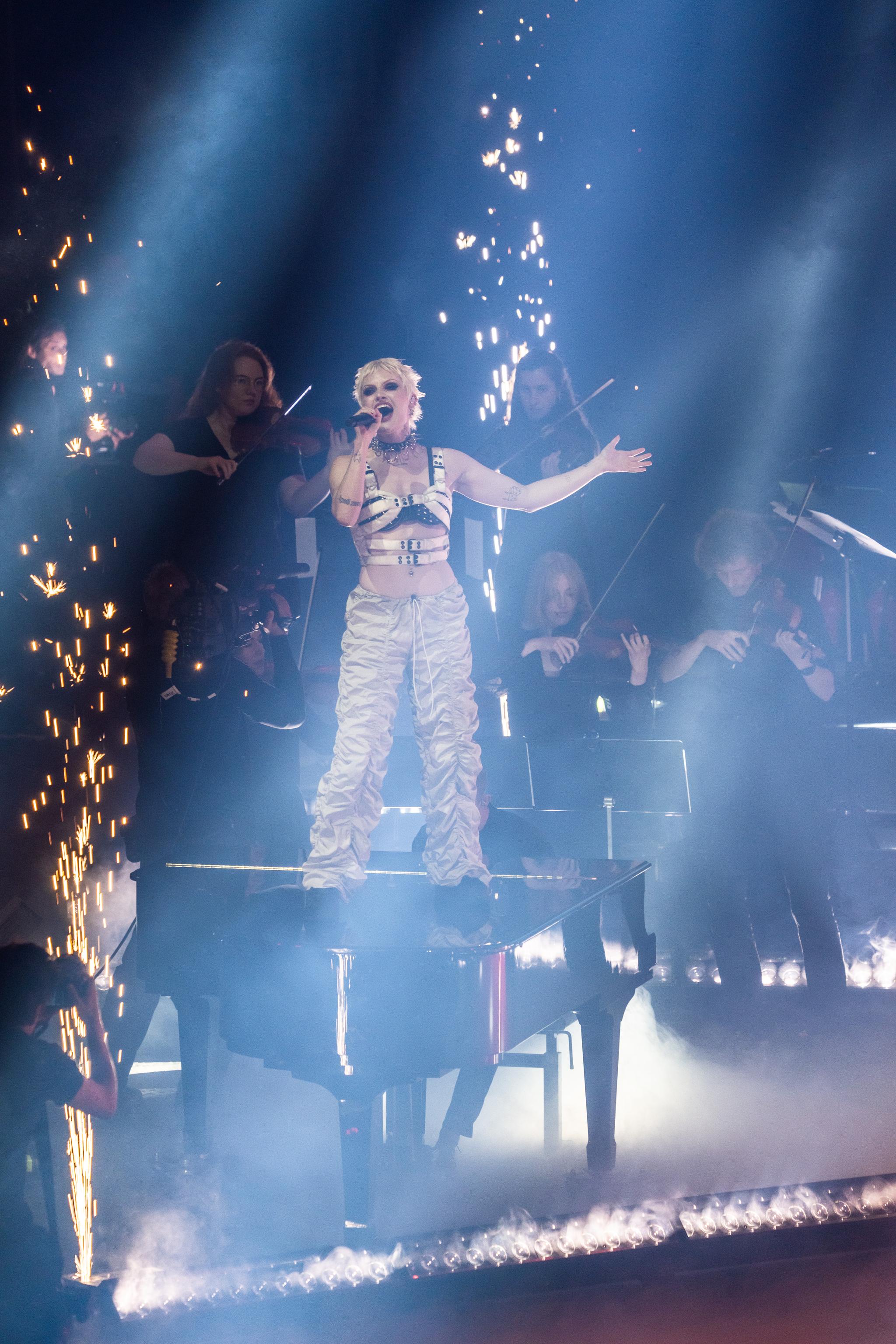 Besides creating glorious stage moments for the singer and the orchestra, our main challenge was to enact the entrance of the players in a way that rivals their virtual performances in the game’s rift. Using all the technological means of the kinetic and light installations, we added coolness, determination, and a massive pyro display during player introductions. We elevated their entrances by means of clear stage direction and prior coaching with our experienced choreographers. Comments from the LEC’s dedicated die-hard fans on YouTube and Reddit (one of the most stringent streams of critique) support our claim.

At the end of the competition, team Rogue dominated G2 Esports in a 3-0 win. Their victory was celebrated by a bombastic finale for which we also designed the sound structure and pyro elements. In this closing ceremony, we re-awakened the kinetic sun, journeyed out of the eclipse mood back into the sunlight, and are now ready for another season of the League of Legends.

The opening ceremony culminated in the final team shot, in which the two opposing teams were positioned in front of the opening ceremony stage’s set, including the sun and the two main colours of the games. In fact, we composed the stage design always with this shot in mind: The celebration of the players became the frame towards which the entire ceremony was geared.

Once the winner was determined, a series of music highlights and visual effects triggered the return of the sun as an active part of the ceremony, which led into the victory celebrations. The winning team Rogue was cheered with a bespoke pyro effect that lasted for roughly 60 seconds in the background of the camera shot. BRS arranged the structure of the musical lead-up and the pyro comets display that provided a highly visual landscape for the grand finale.